WALTER SCOTT - THE FATHER OF THE HISTORICAL NOVEL 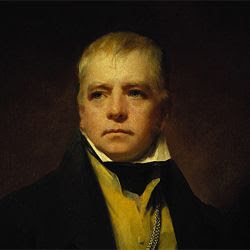 Download the Power Point Presentation THE HISTORICAL NOVEL with notes about Walter Scott,  Waverley and Ivanhoe, the themes and main features in Scott's work, the historical context of his novels, similarities and differences between Scott and Manzoni.  DOWNLOAD THE PRESENTATION from the Widget_Box on the right sidebar.


Scott has a Romantic idea of war: he presents it as heroic, shaped by the code of Romances. According to him the battlefield is a place where every man can practise and show his bravery, his loyalty, his desire to sacrifice himself for other human beings or for a cause. War is the field of the Hero and the Rebel dissatisfied with society and its unjust rules. War is considered an idealized moment, men fight for some right reasons and for their ideals.
Scott doesn’t describe the atrocities of killing, he distances the violence of a conflict transforming war into a source of imaginative pleasure, he undercovers the horrors of war with the idea of  future glory. Connected to this conception of war there is the cult of the individual, typical of the Romantic age: a rebel, a hero who fights to defend people unjustly accused, who fights to restore the just lists, against society .
Scott emphasizes heroic individual actions so a great importance is given to single combats or duels fought according to the rules of chivalry.
Ivanhoe can be considered the Romantic Hero: he fights on the right side, to save Rebecca , to help Richard I; he doesn’t accept compromise, he is ready to die for his ideals, he is characterized by a disinterested personal virtue. Ivanhoe fights with the Anglo-Saxons against the evil Normans: patriotism is a virtue that implies active resistance to tyranny and oppressio, a heroic self-sacrifice for the public good. But the sacrifice will be rewarded, in fact the heroe is destined to be separated from the stern demands of patriotic duty and to be consigned to the enjoyment of persoonal liberty and prosperity.
In Ivanhoe, the clash between the Anglo-Saxons and the Normans reflects the social struggle between the aristocracy and the lower classes. In Waverley  the battlefield is also the place where the protagonist is subjected to an evolution: the war is the moment of the moral growth of Waverley, he will learn loyalty and bravery. The war consists also in a cultural conflict between the jacobite rebels, who want to restore the Stuart Dynasty on the throne, and the Hanoverians. Waverley is the point of contact between the two opposite sides. Also in Ivanhoe the two cultures in conflict, Anglo-Saxon and Norman, find their meeting point in the protagonist .
Posted by Maria Grazia at 07:29