FROM THE SATIRICAL NOVEL TO SATIRICAL PAINTING - WILLIAM HOGARTH, MARRIAGE A LA MODE

Hogarth was the inventor of the narrative sequence of paintings. Each sequence followed a theme such as the failure of combined marriages or the corruption of political elections, for examples. Hogarth's oil paintings were then engraved and sold as sets of prints, which made them much cheaper and very popular. Hogarth is at once a realistic and comic artist, a satirist. 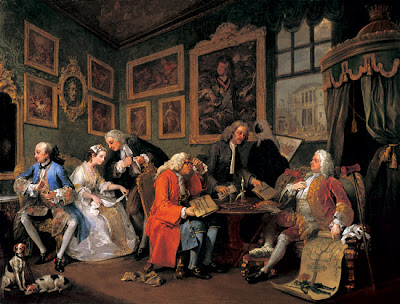 This is the first scene in this series of paintings on the misfortunes of a marriage between people of fashion. The marriage is being arranged in the Earl of Squander's house. The Earl suffers from gout and rests his bandaged foot on a stool. He is receiving the dowry for his son's marriage to a rich merchant's daughter: her money for his old ancestry - he points to the genealogical tree, on the right. The Earl is in debt because of the expenses for the still unfinished Palladian villa seen through the window. The groom, on the left, is dressed as a perfecto fop and has a black patch on his neck (the sign of a venereal disease) . The bride sits with her back to him and looks sad; she's listening to the lawyer Silvertongue, her secret lover.