THE MYTH OF ROBINSON CRUSOE

1. ROBINSON AS THE SUCCESSFUL SELF- MADE MAN

Robinson Crusoe  belongs to the tradition of the bildungsroman - German for "formation novel" in that it follows the protagonist development in a period of his life. the novel starts with Robinson as a young man who is supposed to obey and respect his father's  ideas but knows that he has to work out his own destiny. He breaks with his middle-class background and pressures of his family to face the unknown both because he feels the appeal of adventures and in the name of economic independence.
According to the critic Ian  Watt, Robinson Crusoe exemplifies the homo economicus, the successful self-made  man who enjoys and exploits the island where he was shipwrecked:

"Crusoe's island gives him the complete laissez faire which economic man needs to realizes his aims. At home, market conditions, taxation, and problems of the labour supply make it impossible for the individual to control every aspect of productionistribution and exchange. The conclusion is obvious. Follow the call of the wide open places, discover an island that is desert only because it is barren of owners or competitors and there build your personal empire with the help of a man Friday who needs no wages and makes it much easier to support the white man's burden" .

Watt claims for Robinson the title of capitalist:


"The basis for Robinson Crusoe's prosperity, of course, is the original stock of tools which he loots from the shipwreck; they comprise, we are told, 'the biggest magazine of  all kinds (...) that was ever laid up for one man'. So Defoe's hero is not really a primitive nor a proletariat but a capitalist. In the island he owns the freehold of a rich though unimproved estate. It's possessions combined with the stock from the ship, are the miracles which fortify the faith of the supporters of the new economic creed."
(from I. Watt, The Rise of the novel, University of California Press, Berkely, 1957 - see also THE RISE OF THE NOVEL in this blog)

2. ROBINSON CRUSOE AS THE PARABLE OF A RELIGIOUS CONVERSION

At the beginning of the novel Robinson is a 19-year-old boy with a rebellious attitude towards middle-class values and also their religious frame of mind. But during his long period of solitude he radically changes his mind, starts reading the Bible  and choses God as the constant addressee of his thought. He embodies the myth of the God - fearing and industrious coloniser who brings civilization where savagery had formerly reigned:

"The novel is ordinarily viewed as a working out of the Puritan myth of industry, fulfilling labour, the correct combination of faith and good works, and celibacy. Such content provides the myth of Crusoe. The axis of his myth rests on Defoe's creation of a relatively 'low' individual who rises economically against the background of a somewhat traditional landscape.(...) The myth itself passes into nostalgia for a golden age, in which Crusoe, isolated for 20 years, undergoes a purifying experience, tests out human ingenuity and endurance and succeeds"
(from Frederick R. Karl, The Development of the English Novel in the 18th Century, Thames and Hudson, London, 1975)

3. ROBINSON AS THE PROTOTYPE OF THE BRITISH COLONIZER

Robinson is in many ways the celebration of the English mercantile spirit. Today Robinson appears to us as the representative of the Englishman who in those years was beginning to colonize the world, turning deserted spots into civilied places and lucrative trading posts. Robinson is the archetype pioneer: he is armed only with his own strength and intelligence, and has a Puritan's firm conviction that he has God on his side. He has been rightly defined as the new homo economicus , representative of the early 18th -century Englishmen who were  founding Britain's commercial empire in countries as far away as Canada or India.
Robinson Crusoe is also the archetype colonist. This becomes clear especially in the last part of the novel, after he has met Friday. Their relation perfectly describes the pattern of the relation between colonist and native, or master and slave. Robinson's education of Friday closely recalls the processes of modern colonialism, which follow a recurrent pattern:

ROUSSEAU AND ROBINSON : THE MYTH OF THE NATURAL MAN 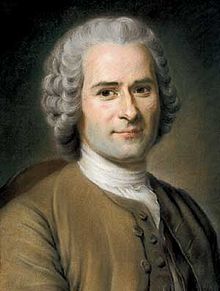 The Myth of the Natural Man
In the 18th century many philosophers and scientists put forward a view of the universe as a living organism (this view was also favoured by the discoveries of the new science, biology, which showed how living organisms were not fixed but subject to change and evolution). The philosophers of the Enlightenment saw nature as a dynamic entity and believed in the interaction between nature and man.  In simplified form: nature is good, and the closer man is to nature the better he/she is. From this idea comes the myth of the bon sauvage and the myth of the good natural man which will be central to both the English Enlightenment and Romanticism. Its main exponent was the French- Swiss philosopher Jean-Jacques Rousseau. In his Discours sur l'origine et les fondements de l'inégalité parmi les hommes he considers society to have spoilt the freedom and virtue of primitive peoples who lived closed to Nature. Rousseau deals with this theme in his two best known works: the novel La nouvelle Héloise and the political treatise Du Contrat Social, in which he argues that the basis of society is artificial and advocates a return to nature.

Rousseau's reading of Defoe's novel
Rousseau wanted his philosophy of Man and Nature to be at the core of the modern educational system. In this view he wrote Emile, in which he says that only by stimulating the natural impulses and interests of the child can a true education be achieved. To do so, according to Rousseau, no books are necessaty except one, Robinson Crusoe: "The one book that teaches all that books can teach". Defoe's novel is considered essential to a child's education especially for  two reasons: it shows him/her how to satisfy only natural or primitive necessities, such as those experienced by Robinson on the island; also, Robinson embodies one of Rousseau's favourite ideas: a radical, that is complete, individualsm.

Rousseau's view of Robinson Crusoe, however, seems idealized, or perfectly suited to his own philosophy. Modern critics and readers have pointed out that, in fact, Defoe and Rousseau had very different ideas of nature. Robinson, in the first place, doesn't choose to live a natural life in a deserted place, as Rousseau's heroes do: he is forced into solitude and lives the island as soon as he can. Secondly, Defoe mainly conceived of nature as a resource to be exploited economically. Robinson alone on the island doesn't feel closer to nature, nor does he lose much time philosophizing.  The absolute freedom from social restraints which Rousseau asks for man is used by Robinson to exploit the island, first alone and then with the help of Friday who provides him with free labour force. As a critic has pointed out: "For the original Crusoe, 'nature' is appealing not for adoration but for exploitation".