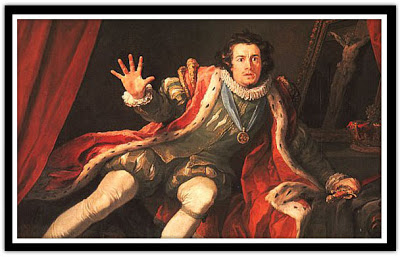 While historians and historical fiction writers have re-discovered and re-written what people for centuries have thought of Richard III, the only image we have on stage and in films is the one we inherited from Shakespeare.


"The history of the world, like letters without poetry, flowers without perfume, or thought without imagination, would be a dry matter indeed without its legends, and many of these, though scorned by proof a hundred times, seem worth preserving for their own familiar sakes". (from the preamble of Richard III 1955)

On Imdb you can find a detailed list of all the filmed works dedicated to or  focusing on Richard III,  and including even those movies just featuring him as a minor character. But, except for The Black Arrow (adaptation of R. L. Stevenson's historical novel in which young Richard of Gloucester helps the protagonist Richard - Dick - Shelton), in all of them we have him portrayed as the wicked villain.

It is also true that  Shakespeare's Richard has his fascination: he is sharp-witted, articulate, cunning and persuasive; he works his charms both on the other characters in the play and on the audience. So, we risk to be seduced each time he is on stage and looks directly to us reveiling his treacherous plans. However, as perfect as Shakespeare's Richard is, it is time the literary villain is substituted with the historical figure based on documents and not on propaganda.

And therefore since I cannot prove a lover


To entertain these fair well-spoken days,


I am determined to prove a villain …

So far, the most famous and remarkable Richard III movies we have are:
- Laurence Olivier's Richard III (1955).

- Al Pacino's Looking for Richard (1996), which is more a documentary film about Shakespeare’s significance and relevance to the modern world through interviews and an in-depth analysis of “Richard III.”

- Then, if you love modernizations, you might want to  have a look at Shakespeare's Richard III (2008) withDavid Carradine as Buckingham and Scott Anderson as the protagonist. This modern day retelling  is set in contemporary Hollywood.

Here are two videos from more recent version of Richard III. Video 1 is from BBC 2 version in the series The Hollow Crown, starring Benedict Camberbatch.

Starz "The White Queen" tells the story of The Wars of the Roses from a female point of view. The video below is its finale: Richard III is slaughtered on the battlefield after being betrayed by his allied. (Beware: the video contains graphic violence)

Read the text in your book and then compare the two videos. Point out as many differences as you can and write them down.

(materials and pictures for this blogpost are taken from my other blog FLY HIGH!)
Posted by Maria Grazia at 13:41